According to the Centers for Disease Control (CDC), about 10% of women in the United States have trouble either conceiving or staying pregnant. It is only an assumption, that with the economy in the pits, the rise in the cost of living and gas prices, that only a fraction of those women have the luxury of affording infertility treatments. A consultation with our fertility specialist was a four hundred dollar fifteen minute conversation that basically could have been summed up in a single sentence. It had been x many months, and I still wasn’t pregnant. Claim Your 20 Free Pregnancy Tests – Click Here

So, searching for other alternatives, anything, I could try other than a six hundred dollar IUI, becomes imperative to keeping not only my emotional peace but, the financial peace as well. Infertility is enough of a stress on a marriage without adding the financial burdens that comes along with it.

Luckily, there are a few over the counter fertility drug options for the proactive woman who wants to take matters into her own hands. One drug is Vitex. Also known as “Chasteberry” or “Monk’s Pepper”, it is a herbal remedy said to aid in women’s general reproductive health. It can be taken in a pill, tea, or drop form and is relatively cheap. A few bucks a bottle, if you buy the pills. It can be found in any local health food store or on the internet (even Amazon.com).

One over the counter remedy that I personally tried and enjoyed if nothing else, than for the flavor was Red Raspberry Leaf tea. My favorite brand of it was The Traditional Medicinal tea. It had a pleasant flavor that could be sweetened if desired and it became a calming nightly ritual to drink it. It is said to tone the uterus but, because it can cause uterine contractions it is suggested to stop the herb if pregnancy occurs. It was after I started drinking the tea that I had finally, after 4 years, 2 IUIs, and several months of Clomid, became pregnant. Although I wasn’t “trying” at the time (in fact my husband and I had given it up) I still continued the tea in hopes that it would help my painful menstrual cramps. I had immersed myself in exercise, yoga, and horseback riding, babies far from my thoughts at the time. Whether or not the tea had something to do with our success, I can’t tell, but I can’t help but wonder if it played a role.

Another over the counter remedy I’ve read about is Evening Primrose Oil. It is said to help women produce higher quality cervical mucus to help sperm travel, although, it too is supposed to help with PMS. Due to the fact that it can cause uterine contractions, it should only be taken from menstruation to ovulation and like the other over the counter drugs mentioned, it needs to be taken a few months to build up in the system and see results.

This one wasn’t around when I was having my kids. I wish that it were, and perhaps I wouldn’t have gone 4 long years trying in vain. Fertibella is an excellent fertility supplement, blended from a special formulation of vitamins, herbs, and minerals. With just the right blend, it combines all the fertility-boosting properties of various natural ingredients into one powerful punch. As a monthly reproductive support system with 12 different monthly blends, Fertibella ConceiveEasy is meant to follow a woman all the way through her trying to conceive journey to pregnancy. 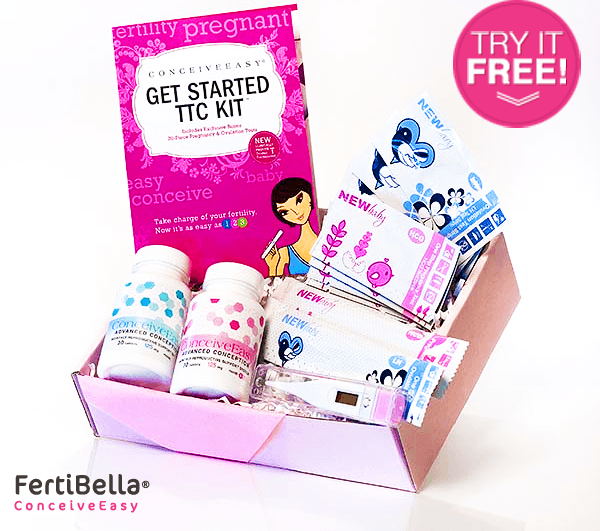 Ovulex is another example of an over the counter fertility drug. It is an all natural drug that contains several herbs that in combination are a recipe for overall reproductive health. It contains Vitex, Dong Quai (regulates menstrual cycles), Arizona Red Clover Blossoms (said to help women with estrogen deficiencies), Licorice Root (to help women who have infrequent periods), Siberian Ginseng (regulates general reproductive hormones), Red Raspberry Leaf, and Black Cohosh (also regulates reproductive hormones).

It should be noted, that I have used the terms “drug” and “herb” almost interchangeably. Most of the pharmaceutical drugs that a person gets are derived from herbs and herbal remedies should be treated with equal care. Not unlike a prescription, they also entail side effects and interactions.

ConceiveEasy® TTC Kit™ is the most complete fertility system available over the counter. Clinically proven to dramatically increase your chances of conception and help you get pregnant fast from the very first use. And now for a limited time, Try a FREE starter pack today & receive a FREE Digital BBT Thermometer and 20 FREE pregnancy tests!